For Protocol, a news site launched by the publisher of Politico, I analyzed thousands of contributions from employees of top technology companies, as well as the donations those companies’ PACs gave to candidates. My findings: Tech companies divide their political spending very neatly between Democrats and Republicans. Their workers — whose dollars largely fund their employers’ PACs — support Democratic candidates by a wide margin.

For years I’ve been reporting on vaccination rates in public schools. In June I examined California’s latest data set and reported on how the state’s efforts to stop parents from skipping their kids’ vaccines just led parents to find another loophole to avoid the shots. At one school in rural California, two-thirds of kindergarteners received a medical exemption — essentially a doctor’s note stating their kids shouldn’t get vaccinations — that allowed them to skip immunizations.

I also used a state database to plot immunization rates by zip code; click here for the bigger map.

This piece followed research I did for a WIRED print story about the measles outbreak in Brooklyn, for which I mapped vaccination rates nationwide and plotted the cities most at risk of a measles outbreak.

Keeping CEOs at top technology companies safe is costly: This year Facebook will spend a cool $10 million on personal security for cofounder Mark Zuckerberg, a figure that’s nearly quadrupled over the past six years. In my latest for WIRED, I explained who’s spending what to keep their people safe, and why. 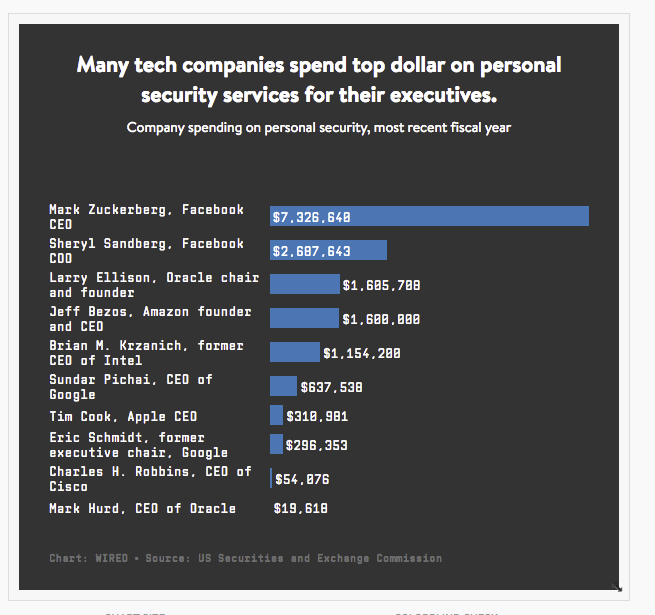 Following mass shootings in Pittsburgh and Thousand Oaks, California, I once again dove into the data on Americans’ very unique relationship with guns. Among the stats: the US is the only rich nation to see so many citizens die from bullet wounds; two-thirds of gun deaths in the US come from suicides, US manufacturing of firearms has skyrocketed since Barack Obama was elected.

In the chart below, I plotted data about deaths per capita by country against GDP per capita for more than 100 nations. As you can see, the US stands alone.

Two years ago I analyzed data from the US Federal Election Commission to determine the political leanings of workers at tech companies. This year, I did it again for the midterms, analyzing more than 100,000 political campaign contributions made by workers at five top technology companies.

This piece also shows some of the work I’ve been doing at WIRED, getting our new data-visualization tool, Datawrapper, working with Condé Nast’s custom-built CMS.

In August I mined public data from the US Federal Election Commission to determine where Presidential candidates were getting their donations. Since individuals have to specify their employer when they make political contributions, it’s not difficult to identify which employers’ workers are interested in which candidates.

The results: The companies whose workers sent the most money to Hillary Clinton read like a list of who’s who in Silicon Valley, with Google workers sending more than a quarter million dollars to the Democratic nominee in a three-month period. Trump, meanwhile, collected the most money from workers at a real estate company in Mobile, Alabama.

In August 2016 I reported on the diverse geography of political candidate contributions, drawing on public data from the US Federal Election Commission.

One fun finding: While New York generally votes Democratic, Manhattan is neatly divided into red and blue halves: westsiders donated heavily to Hillary Clinton’s campaign, while the east side, where Trump Tower is located, sent cash to the Republican nominee.

For an infographic in WIRED’s March issue I explored data regarding gun ownership, production, violence, and regulations. This was a follow-up story to a feature I wrote in 2013 following a mass shooting in Newtown, Connecticut.

As part of my occasional series investigating the vaccination rates of schools in California, I investigated new statistics regarding immunizations of kindergarteners. I found that a new state law requiring kids to get their shots may actually be working.

In February I reported on the vaccination rates at daycares associated with Silicon Valley companies. In my investigation I found that the childcare centers affiliated with several large companies — Google and Pixar among them — had unusually low rates of vaccinations among young children.

I followed up on the story here and here.

I discussed my reporting on CNBC’s Power Lunch show.

For Wired’s encyclopedic 20th anniversary issue, I analyzed more than two dozen iconic IPOs of the past twenty years and compiled them into this infographic.

“Overkill,” my feature on the ammunition industry, appears in the March 2013 issue of Wired.

How do Google ads work? This diagram, which accompanied a feature story by Steven Levy about Google’s advertising technology, explains how the search giant’s scoring system ranks text ads.